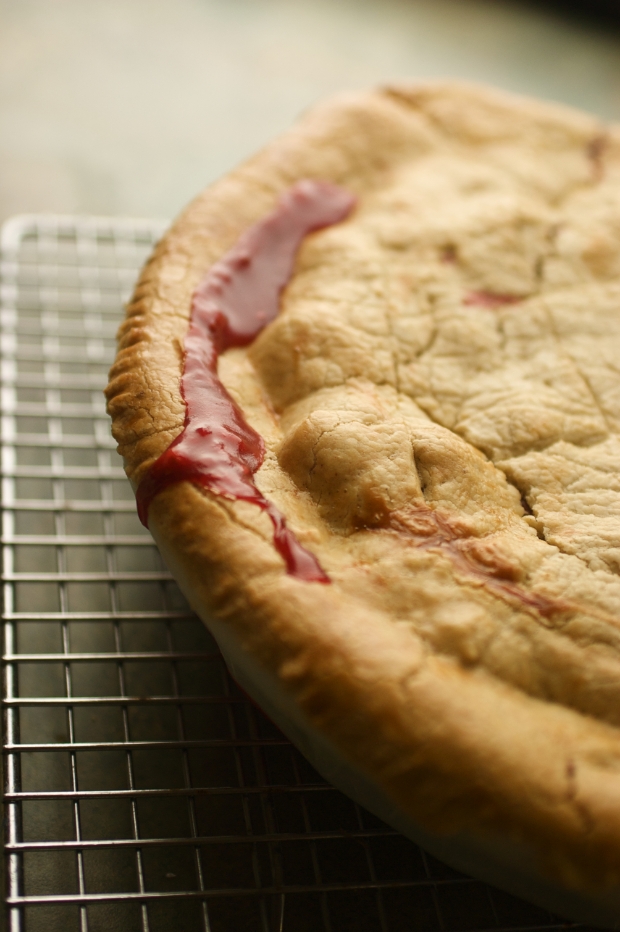 As a species, we seem to be not too comfortable with our not-perfect places. This is pretty amusing, if you think about it. We’re all inherently flawed  because we are alive  but we’re all working so damned hard to pretend we’re not. We imagine that everyone else has clean houses, children who never whine, shiny windows, clear hearts, full gas tanks, and organized days.

Raise your hand if you have all of those  plus a balanced checkbook, a computer with plenty of memory, and you weigh exactly what you have always hoped you would weigh. No one? I didn’t think so.

If we’re all imperfect, why is imperfection not the state we are hoping to attain? We’re already there! What would the world be like if we spent our time trying to glorify our carpets that need cleaning, our walks that need taking, our darling children who still don’t sleep through the night most of the time?

And so, in this spirit, I want to talk about the pies that don’t work. Not that lovely one up top, the one with the flaky crust and the splendid photographic ooze. Those are the pies we put on our blogs, the ones we put down on the table in front of guests with a flourish, the ones we dream of when we start to make a pie.

I want to talk about the other pies, the imperfect pies. 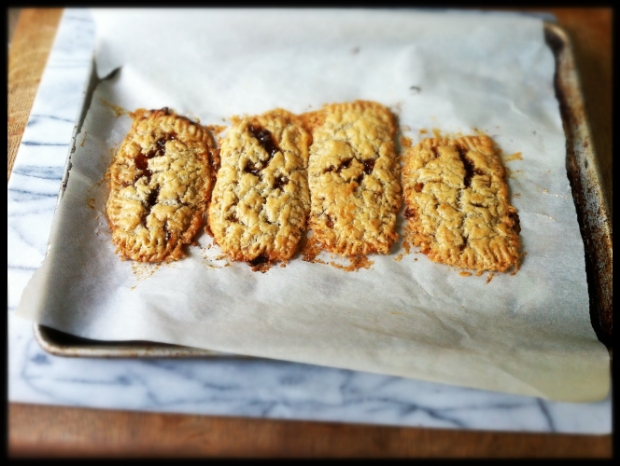 Let’s talk about these hand pies, the ones that didn’t come out the way I had hoped.

I converted a recipe from one of my favorite new cookbooks, The Homemade Pantry: 101 Foods You Can Stop Buying and Start Making

. I’ll tell you more about it next week and share a recipe for cheddar crackers we’ve been making in droves around here. Addictive. Don’t judge the book by the crackled, splitting-apart toaster pastries up there. My pie dough  you can make hand pies, of course  went askew.

They were utterly wonderful in the taste. I handed them to friends who came over that afternoon, apologizing for the look and the fact I thought they had too much butter. “Well,” said my friend Sue after she took a bite. “I don’t care. They’re delicious.”

In fact, they might have been more delicious for the imperfections. No one expected that much. The fact they had too much fat in the dough meant that crust was especially flaky. Lacy, almost. With a fig filling? Gone in moments.

Still, I thought about doing them over. Figuring out what went wrong and making them beautiful, finding just the right light, the right lens, the right moment of calm to make them look so stunning that you might gasp when you saw the photo and think, “I want that!”

Ah the hell with that. Here they are, imperfect.

I make imperfect pies sometimes. How about you?

I decided to not make them again. Lu’s preschool was closed unexpectedly, which left us without any childcare for the day. Instead of asking Danny to take her to the playground while I worked hard to make perfect pie dough, photograph it in a quiet house, and have hand pies waiting for them on their return? I took Lu out instead. She has been requesting Mama time, every day. We went to the library, where she sat in my lap and listened to me read one book after another after another. We ran and laughed, which was such a relief. She’s almost 4, understanding for the first time that she’s separate from us, and clinging. Clinging to my leg, no matter how much time we spend together. And the whining. Have I mentioned the whining? Laughing in the grocery store together as we walked down the pasta aisle was pretty much heaven.

So I gave up the perfect-looking hand pies to spend more time with my daughter. I’m glad I did.

Besides, this gives me the chance to talk about some things you might consider the next time you make a pie crust.

For pie crust to be flaky, to not fall apart as a dough, to fall apart wonderfully as a finished pie under the fork? Everything has to be cold.

My friend Debra, in this post on gluten-free fennel tart, has a great practice. She keeps some AP GF flour and butter in the freezer. That way, when she feels like making a pie, she pulls them both out. She also grates the butter in the food processor, because it’s impossible to cut frozen butter into cubes and do it well.

I forgot this the other day. I’ve been getting sloppy. I pulled a couple of cubes of butter from the refrigerator, cut them into cubes, answered a phone call, and went back to making the pie. I could see the melted butter on my fingerprints but I just kept going.

(After you have the pie crust made and formed in the pan, put it in the freezer for 15 minutes before you fill it. Even better.)

When I first started making gluten-free pie dough, I dutifully wrapped the discs of dough in plastic wrap and let them rest in the refrigerator for 30 minutes before touching them. Then, I started thinking, “Hey! There’s no gluten! No need to let them rest. No gluten to be activated.” I started rolling as soon as I had a disc.

Nope. Not doing that any more. Even if we don’t have to worry about the gluten strands, the dough needs time to hydrate. Let the discs of dough rest in the refrigerator for at least 30 minutes. Overnight is best. Trust me on this one. I forgot to do this the other day. Overnight. Take the dough out of the refrigerator and let it come close to room temperature. Let it rest for 15 to 30 minutes on the counter before you begin rolling it out.

Every baked good has a structure. The amount of flour you use in conjunction with fat with liquid? It matters.

Why did this pie crust feel like it had too much butter when I used the same recipe I always do?

Because I had almond flour in the AP mix. I’d tossed some in, just to see how it came out. Bread? Great. The pie crust? Not so much.

When a recipe has 4 ingredients  flour, fat, salt, and water  every single one counts.

Making pie is meditation. Why did I interrupt that sacred mindful time to make these? Because I was trying to impress you with homemade gluten-free pop tarts.

So there you have it. There are more guidelines for pie  perhaps you’d like to contribute a few you have learned  but these will do.

In fact, these rules feel pretty good for living life more easily: keep chill, let it rest, remember the structure, and slow down. (And connect.)

Maybe imperfect pies are better in the end.

There are some beautiful pies  perfect and imperfect  on the Pie Party 2012 page. Go have a look.

49 comments on “how to avoid common mistakes while making pie”