“Leave the gun. Take the cannoli.”

I’m tempted to write only this. After all, it’s the only phrase I hear in my head when someone says cannoli. Probably you too. (And if you don’t know what it is, look here. Watch out  you’re going to want spaghetti and meatballs after watching this movie.)

However, I want to share just this bit more.

I am constantly astonished by how much better my life is now than when I ate gluten. If you have been reading this site for awhile, you know this is true. In fact, you have been watching the story unfold  finding my health, writing here, getting an agent, meeting Danny, publishing a book, Lucy arriving in our lives, writing a cookbook, moving to our island home, going around the country talking with people about this cookbook. Add to this the fact that I don’t have to grade papers anymore? That alone would be enough, frankly, to make me say that living gluten-free is joy for me.

But here’s the other part I love. Would I have ever made cannoli from scratch when I thought I could eat gluten? No way. I would have driven to a bakery and eaten the work of other people’s hands.

That bakery cannoli? No way I would ever remember them as vividly as I will remember these gluten-free cannoli.

I’ll never forget spending the afternoon with my dear friend Nina, who came over just to make cannnoli with me, Danny, and Lucy. None of us had cannoli tubes. None of the stores we looked in had cannoli tubes. So we winged it. Nina’s wonderful husband, Booth, fashioned some cannoli tubes out of old bicycle handles. The kitchen was a cluttered mess from all the baking we had been doing earlier in the day. Lu skipped her nap, so she was cranky and clingy, the opposite of her usual self. Danny heated up the oil, then he had to leave for work. The handlebars were too thick, so we switched to something smaller. That’s why you could have found me in our kitchen, wrapping gluten-free cannoli dough around a bright blue Sharpie (pen cap on, of course). Those were too thin. So, like Goldilocks (and the Buddha), we found the middle way: the handle of an offset spatula.

How could I ever forget this?

In spite of the fact that the shells kept popping open in the hot oil, or being too small to fill with ricotta, we were laughing. No matter that Lu wanted to jump up and down on the conter and knock cannoli shells around, Nina and I kept going. We made fresh ricotta togehter, the first time for both of us, and were amazed at how easy it is.

And the shells, even the broken ones, had the same cisp exterior and flaky soft interior of a real cannoli shell. Eureka.

The next day, the lovely woman who runs Lu’s daycare – a former student of mine, who found out a year ago she should not be eating gluten and became pregnant after years of trying  read my update on Facebook. “I have cannoli tubes.” And so, we borrowed a bag of battered metal tubes to make this decadent treat again.

This time, Danny and I did this together. The dough kept sticking to the tubes when we tried to slide it off before going into the oil, so we greased them down. With greasy fingers, and the kids of our friends bouncing on Lu’s bed, we plunked cannoli dough into the hot oil. Again, some of them opened, but we just dusted those with powdered sugar and gave them to our brunch guests.

Our friend Alejandra, who grew up first in Argentina (in an Italian area) and then Philadelphia, and thus grew up eating a lot of cannoli, took a few bites of the cannoli shells, then said, “Oh my god, these are fantastic. I like how buttery they are, with a slight tang, from the buttermilk.” She took another bite. “These are better than regular cannoli,” she said.

We made another batch of fresh ricotta (so easy!), with Alejandra watching so she could do it at home. When it cooled, we stuffed the few shells that stayed together with fresh ricotta, cinnamon, and sugar. I took the photo you see on top, and then we ate. Wow. Heaven.

And the next day, as I was reading the regular recipe again before writing my own version here? Well, I’ll never forget the moment when I realized, “Shauna, you doofus! You leave the cannoli dough on the tube in the hot oil. That’s why they were falling apart!”

And I will always remember how I posted the photo you see on top on the Facebook fan page for this site, and dozens of you wrote statements similar to this: “OMG! You gave me my Italian heritage back.”

You see, I like eating cannoli. (However, after this week, I don’t want anything sweet for a month. Ugh.) I made these so that we could make them again someday. But really, I made these because so many of you wrote that you remember making these with your grandmother, and you thought that sweet ritual of baking together was gone forever.

Here they are. Make some cannoli.

And leave the gun. 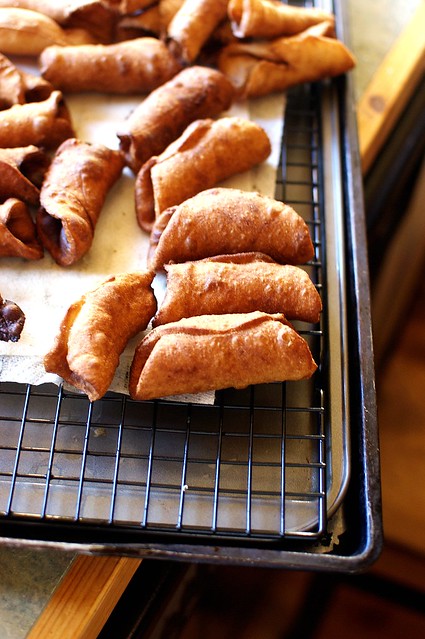 One thing I have learned through teaching myself how to convert gluten recipes to gluten-free recipes: choose a great recipe as your inspiration. I searched through hundreds of cannoli recipes online and many of them looked dubious to me. However, when I found this recipe from The Arthur Avenue cookbook, I had my base. The author of this recipe grew up in a bakery making cannoli, then became a baker himself. He wouldn’t lead us astray.

Find the best source you can for a reliable recipe, then play. That’s what I do all day these days. I love it. Plus, in the end, you get cannoli.

Preparing to make the cannoli. Have all the ingredients ready in a mise en place. Pour the 1 quart of safflower oil into a large Dutch oven. Set the Dutch oven over a burner on medium-high heat. You’re starting to heat it to 320°.

Making the dough for the shells. In the bowl of a stand mixer, combine the flour, xanthan gum, guar gum, sugar, shortening, salt, and cinnamon. Run the mixer on low speed to combine the ingredients and aerate the flour. Pour in the rum, honey, and egg, then mix until they are combined. Here’s where you are going to need to use your own judgment  add the buttermilk 1 tablespoon at a time with the mixer running. You are looking for the dough to come together and wrap around the paddle of the mixer. So add 1 tablespoon at a time, let the mixer run, and watch. If the dough is still dry, add another tablespoon.

(The first time we made cannoli, it took 2 tablespoons. The next it took 6. The temperature and humidity of your home will affect the dough. So use your senses here.)

Rolling the dough. Put half the ball of dough between 2 pieces of parchment paper on the counter. Roll out the dough as thin as you can, about 1/4 inch thick. Now, if you have a cannoli cutter, as the original recipe says to use, pull that out here. If not, we cut a big oval around the cannoli tubes. Put a cannoli tube in the center of that oval of dough, then flip the cannoli tube so the edges of the dough are hanging down. Brush egg wash in between the two flaps of dough, then press them together. Crimp and press until they are sealed. Repeat with the remaining cannoli tubes.

Cooking the cannoli. When the oil has reached 320°, gently put the cannoli shells (still attached to the tubes) in the hot oil. (Keep the kids away and be extra-vigilant yourself when you are working with hot oil.) Try 3 at a time in the hot oil, cooking until they are golden brown, about 3 minutes each.

Filling the cannoli shells.
Combine the ricotta, sugar, cinnamon, and chocolate chips in a bowl. Fit a pastry bag with a large tip, then stuff the bag with the filling. Pipe the ricotta mixture into the cannoli.

Sprinkle the cannoli with powdered sugar.