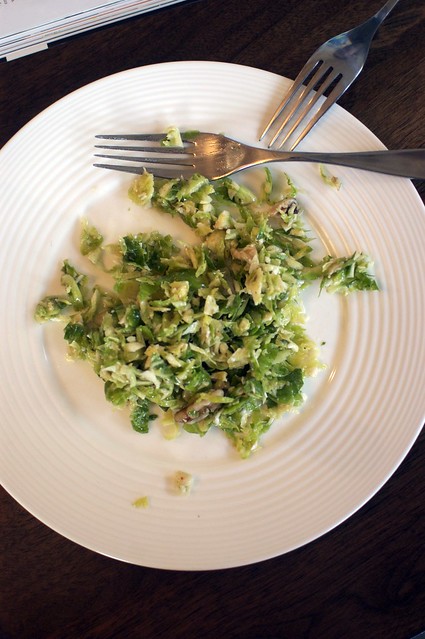 I’m a little obsessed with this brussels sprouts salad. Does that make me weird?

I’m weird enough that I just had to ask on Twitter: Brussels sprouts? brussels sprouts? brussel sprouts? My first instinct was the right one. But I’ve been seeing it spelled differently, with lower case, no s, and even an apostrophe, so I was temporarily confused. People, they were popularized in the city of Brussels in the 1300s, apparently. So they are sprouts from Brussels. The New York Times says we can make them lower case, if we want, since they have been popularized enough that we can refer to them colloquially, not as a brand name, per se. I’m stubborn and old-school. I was going with Brussels sprouts.

Then, the production editor for the Guardian newspaper in London wrote to me on Twitter. (I know, right? How wild is that?) He pointed out the Guardian and Observer style guide on capitalization, which states that the tendency toward turning lower case words “…in part reflects a less formal, less deferential society.”

Well, I’m all for less formality, actually. And frankly, if The New York Times and the production editor of The Guardian suggest that I put this in lowercase, that’s where I’m going.

(And you might be thinking, Shauna? Could you go back to the food? Okay.)

You might find that you have a certain feeling about brussels sprouts. In fact, for most of you that feeling might be Ewwwwww!

This salad will change your mind.

Danny and I first ate a version of this salad at Picnic, a wonderful place to buy pork campagne and a container of butternut squash soup, then grab a bottle of wine for a spontaneous gathering. (They call it a food and wine boutique.) It’s here in Seattle, run by our friends Anson and Jenny.

Actually, they were Danny’s friends first, when they all cooked together at a restaurant called Cassis. After cooking and serving food in that small space, Danny went on to cook at the restaurant we wrote about in our cookbook

. Anson and Jenny got married. She went to cooking school. He worked at Crush.

The restaurant business is tough on the feet, the hands, and the mind. After awhile, Anson and Jenny decided to leave those more-than-full-time night-time jobs and open Picnic instead. 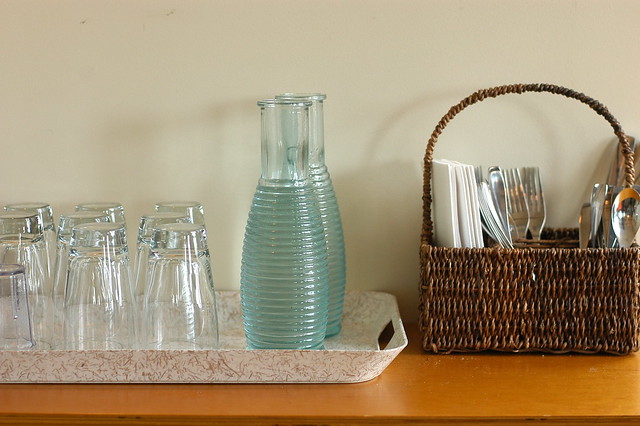 We’re so happy they did. Picnic is a series of small perfections.

Walk into Picnic and you’ll find a calm, spacious room with a well-stocked deli case at the end. Great wine, local honey, lovely chocolates, pots of jam and Rancho Gordo beans  Picnic has a good selection of foods you want to eat. Anson and Jenny have handpicked every single one with attentive care, focusing on local and small-batch made. They’ve never steered us the wrong way.

I love the quiet minimalism of Picnic. Last year I took a photo of this  the water glasses and silverware basket on the side wall. I had it as the desktop on our computer for awhile. I found it so calming. This is the dream  a house that feels like this. Of course, with an enthusiastic 2-year-old with an uncanny ability to open just the drawer you don’t want her to find, this dream is far off in the distance for us. So we stop into Picnic.

We feel good when we are there.

There’s an Ernest Hemingway quote I love: “What’s moral is what you feel good after.” I don’t think he meant the empty head-rush kind of feeling good. I read it as the feeling you have when you have been sitting with a sure-headed friend, the one who makes you laugh and reminds you of the best version of who you can be. When you get up to leave, you feel strong in the gut and light at the same time.

Plus, their food is tremendous. Anson’s pork rillettes are creamy, melt-in-the-mouth bites. His patés resist the fork for a moment, then yield. They’re as good as Danny’s. (That’s saying something for me.) Their soups are smooth and full of bold flavor. And they make salads that make me long for vegetables.

A couple of weeks ago, we ordered this brussels sprouts salad, with aged cheddar and crumbled walnuts. We had a few bites of salumi, a bit of paté, some butternut squash soup, then an entire plate of this. I could have eaten another 3 plates of this.

So I have. At home. With a food processor’s slicing blade, a bag full of brussels sprouts becomes greens, slightly nutty, bright and different than you imagined.

It’s good to have your perceptions of the world shift, a bit. Good friends, and good places like Picnic, can do that to you.

Brussels Sprouts Salad, inspired by Anson and Jenny at Picnic and Melissa Clark’s In the Kitchen with A Good Appetite

A few weeks ago, Melissa Clark came to Picnic to promote her wonderful new cookbook. If you don’t know Melissa’s Good Appetite column in the Wednesday New York Times, you are missing out on the opportunity to cook good food. She has a wonderful way of mixing both ordinary ingredients with a few unusual ones and creating dishes that you want to make instantly. Most Wednesday evenings, I do.

We met Melissa when we were in New York recently, at a brunch thrown by my good friend Jennifer Perillo. I felt a little awkward before meeting her. I’m such a geeky fan of her writing and food. Would I be able to string a sentence together coherently?

Luckily, she’s wonderful and humble, a bit geeky and talking with her hands too. Within a few moments, I felt utterly comfortable with her. When she came to Seattle for her book, I was lucky enough to have dinner with her and her oldest friend. (I never know where my life is going next.)

We walked across the street to Picnic, where she had a conversation with my friend Molly in front of several dozen gathered people. Afterward, in the ferry ride home, I realized while looking through her beautifully written book that Melissa has a raw brussels sprouts salad recipe too.

Really, why resist? You need this. We’re making it for Thanksgiving this year.

You can make this salad any way you wish. We have made this with aged cheddar cheese, Manchego, and hard goat cheese. Try pecans or pine nuts or almonds. Youll be wanting to eat your sprouts. No kidding.

Slice the Brussels sprouts thin on the slicing disc of the food processor. (If you dont have a food processor, you can use a mandoline, carefully, or a sharp knife.)

Put the sprouts in a large bowl. Add the cheese and walnuts.

Put the apple cider vinegar, olive oil, and mustard into a small jar, along with the salt and pepper. Put on the lid and shake that jar until the vinaigrette has come together.

Dress the salad with the vinaigrette. Toss and serve.

p.s. someone in the comments said she made the dressing for this with maple syrup. well, thank you so for saying that! we tried it tonight — 1 teaspoon of maple syrup — when we ate this salad again. hoo boy! that’s good too. it brightens the dressing in a really lovely way. try that too.