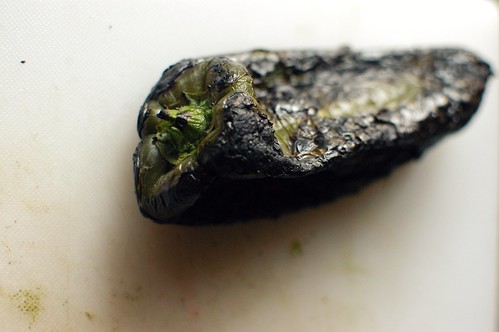 I got some gluten by mistake a few weeks ago.

If you read this site, you might have heard about this already, on Twitter or Facebook just after. I was angry, I was in pain, and I wanted everyone to know what had happened so you wouldn’t have to go through what I went through that day.

I wrote about the details for my bi-weekly Serious Eats column, so I don’t want to repeat myself. In fact, I want this to be brief.

We’ve come a long way in the last decade in understanding celiac and gluten intolerance and what might make us sick. I met someone today whose grandmother is 90 years old. She was diagnosed with celiac when she was 30. Can you imagine how much has changed during her lifetime? (I’m grateful that we have more than white rice flour and cornstarch, for example.) I’m grateful for this increased awareness, the number of gluten-free foods on grocery store shelves, and the chance I have to write this site.

However, we’re still not done changing the awarness of everyone we can, are we? The restaurant that made me sick for three days with one bite of food? They seemed to get it. They told me I couldn’t have the chips because they were fried in the same oil as gluten foods. They pointed out all the menu items I could try. They hustled back to the table every few minutes with new information. This put me at my ease. That ease was shattered by one word: “Oops.” The well-meaning waitress trotted over to me after I had begun my lunch, the one they promised me I could eat, and said, “They gave you the wrong sauce after all. You didn’t eat it, did you?”

Yes. I had eaten it. For the next three days, I endured terrible headaches, multiple trips to the bathroom (on a travel day, changing airplanes, with a toddler), stomach aches, brain fog, insomnia, and some depression and anxiety, which always seems to hit about day three after I get some gluten by mistake. All this for one bite.

I felt about the way that roasted poblano pepper looks up there.

If you read this site regularly, you know that I’m not one to complain. In fact, I’m not complaining here. Mistakes happen. No one died. I survived.

But what if I had been allergic to peanuts? Would the waitress have simply said, “Oops?”

One time, at a pretentious wine bar in Seattle, the annoyed waiter, after I said that I couldn’t have any gluten with my prosciutto and cheese, asked me: “You’re not going to die on us, are you?”

Somehow, I found breadcrumbs in my teeth when I ate my slices of cheese. I don’t know if he put them in there deliberately because he was annoyed I had made a fuss. Or if that restaurant was really that incapable of feeding someone with celiac or a food allergy.

I’m not complaining. I’m just saying, urgently: we still have work to do.

Danny and I are here to do what we can.

It is in this spirit that I tell you this: I have auditioned for a gluten-free cooking show for Oprah’s new cable network, OWN. It’s an open audition. Anyone can upload a three-minute video and fill out the extraordinarily long and deliberately thoughtful form (“What has been your biggest disappointment in life?”) and audition. So, I did it. With the help of the folks who produce Good Bite, I pulled together this video about why I want to do a show.

Originally, Danny and I were going to audition together. We made this video first. We filled out the extraordinarily long form and had fun answering questions for each other. Then, we found out they didn’t want couples. It had to be one person. Danny chose me.

So here I am, vulnerable and open to critique by everyone in the world. Why the heck did I do something that made my hands shake a little all day long today? Because we need a gluten-free cooking show on tv. Imagine the awareness that would spread with each episode! And for various reasons that seem surreal to me, I seem to be standing in the place where I can volunteer for this gig.

I probably have no chance of winning. However, if you’d like to see a gluten-free cooking show on Oprah Winfrey’s new cable network? Well, maybe you’d click over here and vote for me. (And perhaps tell your friends.) 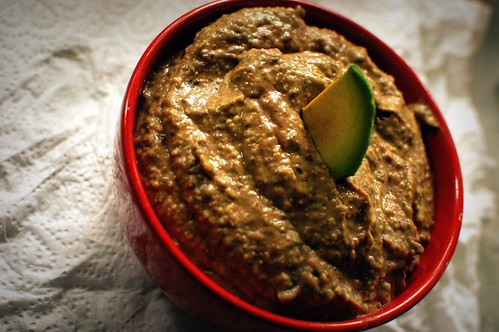 Before I got gluten by mistake at that restaurant, I shared an appetizer of black bean hummus with everyone at the table. (We ate it with carrots and red pepper slices instead of crackers.) Tell the truth, it was pretty bland. The disappointment of the entire experience made me come home and make up this hummus.

The roasted poblano pepper here gives the hummus a bit of a kick, but not so much heat that you feel like you’ve been kicked in the mouth. I love the chili powder and garlic mingling, the mix of black beans and garbanzo in color and texture, the warmth of sesame oil. I never grow tired of avocados, and I used one here in the place of tahini. It’s a dark dip with the brightness of lime and unexpected tastes. We’re pretty addicted to it here.

I’m not sure that I’m allowed to call this hummus. According to this piece in The New York Times, Americans are mercilessly bastardizing the idea of hummus with our artichokes and sun-dried tomatoes. (Also, peanut butter? Really?) Call this whatever you want, then. Just be sure to call me over when you’ve put some on the table.

Roasting the pepper. Preheat the oven to 450°. Massage the olive oil onto the pepper. Put the pepper in a sauté pan and slide it into the oven. Cook, tossing occasionally to sit on another side, until the skin of the pepper starts to blacken and separate from the rest of the pepper, about 20 to 25 minutes. Pull out the pepper and put it in a bowl. Tightly cover with plastic wrap and let the pepper sit until it has cooled completely. Peel it and seed it.

Making the hummus. Put the black beans, garbanzo beans, garlic, lime juice, avocado, chili powder, and the roasted poblano pepper into a food processor. Pulse it up until everything has blended into a chunky mix. Taste, then season with salt and pepper or more of any of the ingredients you feel it is lacking. With the food processor running, drizzle in the sesame oil until the hummus has reached the consistency you desire.

(Note: it will thicken as it sits in the refrigerator, so adjust accordingly.)

Refrigerate immediately and let it sit for at least 4 hours before eating it. Well, you can swipe a taste, if you want. However, the true flavors will not emerge until the hummus has sat for a bit. Plan ahead.