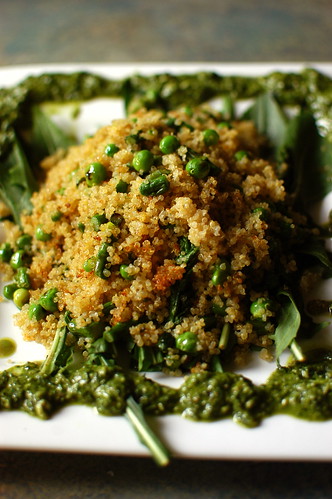 Five days a week, just about 2 o’clock, Lu and I stand by the door for kisses. She waves her hand vigorously, then asks me to stand her up on the windowsill to wave and blow more kisses.

Danny’s leaving for work. Within the hour, he’ll be creating dishes like this.

Many of you write to me, asking if Danny’s still cooking at Impromptu, the restaurant where he was the executive chef when we met, the restaurant I wrote about in my first book. No, he’s not. (And those of you who have driven down to Madison Park, only to be greeted by a darkened storefront, know that the restaurant actually closed down the year after he left.) He left in October of 2008, a few months after Lu was born. He wanted to take some time off. We had this cookbook to write. We had this daughter who had been in the ICU, whose every healthy breath seemed like a dream. He didn’t want to miss a bit of it.

And so, he took almost a year off from being a chef. Oh, he never stopped being a chef in his hands, in his movements, in the way he thinks about food. But he stopped working in a restaurant kitchen for the first time in his life since he was a teenager.

It was a great year. Lu grew and grew stronger. After her surgery was finally over, we let out our breath. (Even if she didn’t sleep more than an hour at a time for four months after it.) Summer meant all the best food we could imagine, in picnics with friends and gatherings at the beach, and long breakfasts with just the three of us. We finished a cookbook, then edited it, most of the time not sleeping more than a few hours a night, but always grateful. And always with Danny creating new food.

When the fall began curling into the winter, I knew it was time for Danny to go back to work. It wasn’t just that we were running out of money. It’s that his beautiful breakfasts were becoming more and more elaborate, fascinating creations that meant empty plates until well after our hunger pangs had expanded into cries. (And if you have a baby, you know this isn’t ideal.) He loves making food for people. It was time for him to feed more than just Lu and me.

The lovely magic that seems to happen when you find your home started working for us here on this island. A job appeared at The Hardware Store, a place for which he had good hopes. I have never seen him so happy as he is at this place. It’s an island restaurant, not haute cuisine, unassuming, and good. On the nights that Danny works, he makes up fish specials and ravioli specials (the fish ones should be gluten-free). And every week, he thinks and deliberates over new produce on the market and how best to celebrate it.

Every Tuesday, he starts serving the new vegetarian special for the week.

“I think the veg specials are awesome. No one could have told me that I would get excited about making vegetarian meals. It’s a new challenge, just the way that cooking gluten-free was a challenge for me that changed my food. We get good produce here. I like highlighting the vegetables.”

It’s ironic that Danny’s in charge of the vegetarian specials. After all, we do write a blog all about pork. But we get most of our produce at farmstands on the island, where we put our cash into old coffee cans and go. Fruits and vegetables are about the only thing that change from week to week. I’ve learned this from Danny  plan meals around the produce first.

“>This is the start of the year in food. Winter was a long haul. There is nothing in February or March to get you excited to cook. Root vegetables are great, and they have their place, but I get tired of them after awhile.”

Of course, it has been so unseasonably cold in this area that some of the seeds I planted in my zeal to start gardening have frozen in the ground. There’s not much in the farmstands besides parsnips and kale, still.

“These vegetables came from California. I’d much rather use local, but California is close. It’s not that far away. The produce company that we use for the restaurant has them in stock now, so it’s spring at the restaurant.”

Bring on the peas and beans.

“This dish screams spring to me. Green. It says, ‘Hello. It’s springtime.'”

All week long, I watch Danny deliberate about what to create next. He studies The Flavor Bible

and what’s at the farmstands, what’s available from the produce company. He dabbles at home, then plays with flavor combinations for the fish specials over the weekend. Danny never stops thinking about food.

And so, this week: quinoa with spring vegetables and a walnut-kale pesto.

“I made this pesto and this dish because we have the start of some spring vegetables and the end run of some winter vegetables. So I had a fair amount of stuff to get rid of. I had to move some product, as we say. In other words, I had a shit ton of kale that we needed to get going. So I made a kale pesto. I thought it was f-ing amazing.”

“Quinoa is a grain a little like couscous. But it tastes better than couscous in my opinion. I like the nuttiness of quinoa. You have to really, really toast couscous to get that nuttiness. We had a ton of quinoa left in the kitchen and I love it. Quinoa seems very light to me. It’s a crowd pleaser with spring vegetables.”

We are both grateful for spring. Fresh starts. New haircuts. Sunlight that seems like liquid when it finally appears.

If you happen to be on our island, come on by The Hardware Store. Danny would love to feed you.

This recipe might look long. Please don’t be intimidated. Something I’ve learned from Danny is how to set up a mise en place, all the necessary ingredients ready to just start cooking. If you want to make this, you can cook the quinoa ahead of time and keep it in the refrigerator, blanch the vegetables while you are listening to your favorite food podcast, and make the pesto a day ahead. Pulling it all together will only take moments.

Every other week here, we want to offer a more complex recipe, something Danny has dreamt up, something that might seem easy for him as a chef, something a bit of a stretch for the rest of us. I’d like you to hear his voice more often. It’s a good one.

(Also, I want you to know that I’m the one that plated up this dish. Danny would have done it differently, but he was at work, and I was home with Lu. She needed lunch. I needed this shot. Voila! And then it quickly became an empty plate.)

1/2 bunch dandelion greens, cleaned and bottom of stems removed
Cooking the quinoa. Set a saucepan over medium-high heat. Pour in the oil and butter and cook until the butter melts and begins to foam. Add the shallots and cook, stirring frequently, until they are soft, about 3 minutes. Add the quinoa to the pan and toast it, about 2 to 3 minutes. Add the salt and stock and bring to a boil. Reduce the heat to a simmer, cover the pan, and cook until the liquid is absorbed, about 15 minutes. Remove from the heat, pour the mixture evenly onto a cookie sheet, and allow it to cool. (You can also cook the quinoa the day before and refrigerate for up to one day.)

Cooking the vegetables. Set a large pot of salted water over high heat (the water should be as salty as the ocean). Have a large bowl full of ice cubes waiting in the sink. Bring the salted water to a boil. Add the peas and cook for until they begin to rise to the surface, about 2 to 3 minutes. Using a strainer, remove the peas from the water and plunge the strainer into the ice bath. Allow the peas to remain on ice until they cool down, about 2 to 3 minutes. Put into a large bowl.

Bring the water back to a boil and add the fava beans. >When the first fava beans begin to rise to the surface, about 2 to 3 minutes, pluck one out of the water. Peel its shell away and look at the bean. It should be a nice bright green. If it’s not, cook the beans for a minute longer. Using the strainer, remove the beans from the boiling water and plunge the strainer into the ice bath. Allow the fava beans to remain on ice until they cool, about 3 minutes. When the beans have cooled, peel away the remaining shells. Put the beans into the bowl with the the other vegetables.

Finishing the dish. Set a large sauté pan over high heat. Add the olive oil. When the oil runs around the pan easily, add the shallots. Cook, stirring, until they are soft, about 3 minutes. Add the basil leaves and cook until they release their fragrance, about 1 minute. Put all the vegetables into the sauté pan and toss them around, cooking, until they are nice and toasty, about 3 to 4 minutes. Add the cooked quinoa. Toss it around on the burner until it is nice and hot, about 3 to 4 minutes. Taste. Season with salt and pepper.

47 comments on “quinoa with spring vegetables and walnut-kale pesto”