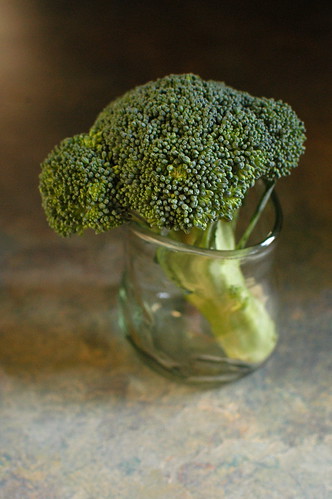 Poor broccoli. It’s such a tender, giving vegetable  all that green and goodness, edible from stalk to top  and it deserves more than most people give it.

It’s that time of year, you know. Early January, when people decide to become “more healthy.” Spent and pasty after weeks of baked goods and revelry, some of us join gyms in a frenzy, wake up early to go running in new spandex clothes, and count calories like we’re counting our pennies after all that spending.

(Psst. It never lasts more than the middle of February, you know. Gyms make all their money for the year in these next six weeks.)

Along with the push to exercise comes the wish to “eat right.” It’s never entirely clear what that means, because newspaper articles herald a new miracle food every day. If you ask people what they should be eating, however, I’m guessing that most of them would say: broccoli.

See what I mean when I write poor broccoli? So many people see it as obligation food, the vegetable we should be eating. How long does any resolution with a should in it last anyway?

(I didn’t always used to eat broccoli well. When I was in college, and trying to be a vegetarian after reading Mollie Katzen’s The Enchanted Broccoli Forest

, I used to dip whole fistfuls of raw broccoli into ranch dressing for lunch. However, it still sounds sort of appealing, if you want to know the truth.)

Broccoli is a celebration in the winter. The skies are bleak and unyielding, the air is chilled against our skin, and there will be no real color until early April. (Oh March, the longest of all months. It’s still two months away.) However, broccoli? It’s vivid green, with little dots of verdant life, a plant determined to grow through cold, dark soil and come up smiling.

It tastes so good too. I like to shave raw stalks into salads of lacinato kale and red chard, topping them with goat cheese and sunflower seeds. Who doesn’t love broccoli with cheese sauce? (Well, probably not so much the lactose intolerant, but I know some who worship it from afar.) No stir fry is complete in this house without the bottle of tamari or several heads of fresh broccoli.

No one, however, could love broccoli as much as our Little Bean does right now. When we steam the florets in water and a touch of butter until they are bright green and yielding to the teeth, she sits up in her chair and chatters. She eats one little tree after another, smiling.

She doesn’t know that broccoli is supposed to be a should. She loves it with buttery fingers and an open mouth.

How do you celebrate broccoli, singing its praises in front of the stove? What are your favorite flavor combinations? What do you think of when you see broccoli?

(I have to admit, to my own shame, that I always think of this lame Saturday Night Live sketch from the 1990s, where Dana Carvey played a bad singer whose only song was a drawn-out, unfunny “Chopping Broccoli.” Every time I cook with it, I sing it, unconsciously. Damn it. I’m doing it now.

And Danny says the photo I took of the broccoli above looks like Princess Leia, with the earmuffs on either side. Damn it. Now I can only see that too.)

Give us your suggestions. Let’s learn from each other how to make broccoli more than a should.

This is a return to a series we did for a few years: the ingredient post. We’ll post up a single ingredient, in season, every other Wednesday. You leave your suggestions and stories, and we’ll learn from each other. The following week, we’ll create a recipe based on the food story that caught us most in the moment of reading.