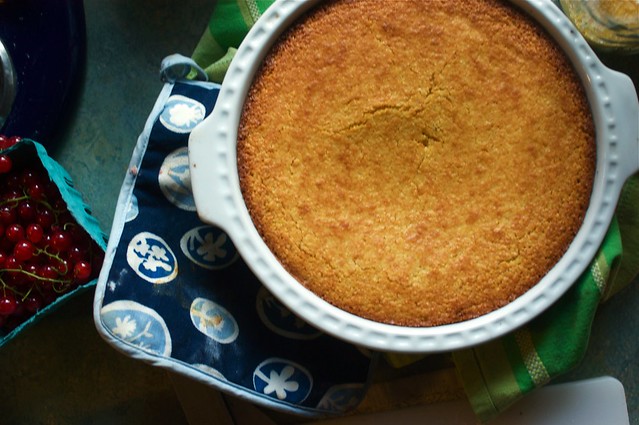 I have been wanting for weeks to tell you about this cornbread.

Look at that golden crust. Don’t you just want to admire it for awhile? Oh, you don’t? You’d rather cut a slice and dive right in? Understandable. Be my guest.

I had this piece gathering in my mind, about the essential subjective quality of recipes. How you may love a dish, and I may want to spit it out. How, no matter how well written a recipe is, someone is going to say it stinks. How we all start from a different place, and so we are all reading a different book really, and how reviews are somewhat specious, therefore.

Yeah. It sounded that garbled in my head, too.

Really, what I wanted to tell you is that I hate Reggie Jackson. In the World Series of 1978, he thrust out his hip while he was running from 1st to 2nd base, to deflect the ball, and thus be safe. Cheater. This much-replayed incident started a chain of events that broke down my beloved Dodgers, who should have been the real victors of that series. This was the second year in a row that the Yankees beat the Dodgers, breaking my 12-year-old heart.

And so, I hate the Yankees. Sorry to lose you if you’re a fan of the pinstripes. That’s just the way it is.

Any association I have with the Yankees is going to be tainted. I’m never going to like them. Or the bleacher bums in right field who shout out obscenities as they slosh beer on their chests in their drunken quest to pump their fists and berate the right fielder playing beneath them. Even when he’s from their own team. So if you asked me to read a book about the Yankees, no matter how well written or compelling a read it is, I’d probably not be able to recommend it to anyone else. Just because I’d be scrunching my lips while I read it.

The same is true for recipes.

Okay, here’s the deal. I’m not making any sense. It’s so damned hot here that my brain has clearly melted.

Yesterday, the temperature was 103°. That’s right. 103°. The hottest day in Seattle recorded history. No one here is equipped for this. We don’t have air conditioning. I rubbed so many ice cubes on my wrists and behind my ears that the ice maker stopped working. I wet my hair so many times during the day in an attempt to cool down that it is now ratted up like some archetypal image of a tough girl from the 50s. Only not that hip.

Yesterday, our friend Tita tried to make us feel cooler by telling us the story of how she and her husband drove across Death Valley in the middle of an afternoon when the temperature gauge read 134°. They had no cool drinks in the car, no air conditioner, and they were afraid to roll down the windows for fear that their faces would fry. Two hours in, she turned to her husband and said, “John, do you hear Beethoven’s 5th Symphony?”
“Yes,” he said. “For the past 20 minutes.”
“John,” she said. “We don’t have a radio in this truck.”

This didn’t make me feel better. Instead, I have been humming Beethoven’s 5th Symphony all morning.

Yesterday, at nearly the peak of heat, the power went out for much of the island. Kaput. Transformers blown because of the heat and lightning strikes. This meant no fans, no refrigerator, no relief from the heat pressing on our bodies. Poor Little Bean was freaked out by the sweat on her face. She had never sweated before. We held our cool as much as we could. There’s one 4-foot spot on the front deck where a breeze the equivalent of an old man pursing his lips and blowing out sometimes shuddered across our feet. We stayed there.

When the fan started whirring its white noise again, we cheered. Power back on. Everything up and running. Except the internet. And I had to make the last changes to the first chunk of our manuscript and send it to our editor last night, before our trip. So a call to the cable company, to see what happened. When the guy on the phone (who was clearly in a cooler place) asked me to check the connection on the modem, I had to crawl under the table holding the computer. Not only did I find shriveled mosquito wasps and spider webs, but I had to pant to breathe. 112° down there, I’m sure. I stood up and had 1/2 cup of sweat on my face.

Have I mentioned that I hate this? Almost as much as the Yankees.

All is better now. The internet started working again. I made the last changes and pressed send at nearly 10. The baby did eventually fall asleep. Danny and I stayed up until midnight, packing our clothes and the baby’s toys. The temperature inside the house was a much cooler 91°.

And now I’m up, at 5 am, trying to write this piece about cornbread, before we take off for Colorado today. Rocky mountain high, indeed  it’s supposed to be only 70° in the mountains. We’re leaving for a family wedding, a joyful reunion of all the Aherns. Much laughter will ensue. All will be well.

There’s still much to do. Danny will be up soon, to help me finish cleaning the house, so that our friends who are staying here while we are gone don’t have to find all those dead moths, the ones fried by the heat as well. But right now, it’s only 75° in the house. Beethoven is fading.

We can’t wait for a vacation.

Hm. I still didn’t tell you about the cornbread. But I feel strangely better now. 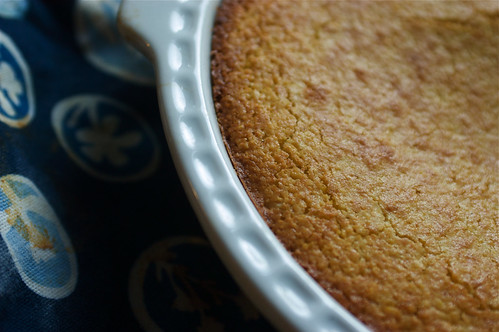 THE BEST GLUTEN-FREE CORNBREAD WE HAVE EATEN, adapted from The Better Homes and Garden Bread Book

My dear friend Tita is the wisest person I know. She’s loving and generous, but she also has no time to waste. If something seems ridiculous to her, she wants nothing of it. (You should have seen her face when we were trying to explain molecular gastronomy to her.) She is a good cook, with no pretentions. So when she says, “This is the best recipe for cornbread I have ever made,” I listened.

And she’s right. This is fluffy cornbread, full of corn taste with just the tiniest gravitas because of the cornmeal. I love that it’s adapted from a book Tita received as a birthday present in 1972. “Everything I have ever baked out of that book has worked.” And gluten-free? With these flours, it’s indistiguishable. It’s just good. Tita had some at our house the other evening, and she loved it. Couldn’t tell the difference.

(If you would like to see why this recipe is in grams, please read

And if you would like to make your own gluten-free flour mix, to make this recipe and every baked good recipe on this site, watch this video.)
140 grams gluten-free all-purpose flour mix
¼ cup sugar
4 teaspoons baking powder
¾ teaspoon salt
1 teaspoon psyllium husk
¼ cup shortening (not butter)
2 large eggs
1 cup milk (you can use non-dairy milk, if you want)
1 cup yellow cornmeal

Cutting in the shortening. Cut the shortening into the flours, the way you would when making a pie dough. You should end up with walnut-size pieces in a sandy flour. (Tita says that shortening, preferably lard, is essential here. Butter just won’t do the same.)

Adding the wet ingredients. Combine the eggs and milk in a small bowl. Make a well in the center of the dry ingredients and pour in the liquid. Stir with a rubber spatula until everything is combined.

Finishing the batter. Stir in the cornmeal, whisking fast, until it is just combined. Do not overstir.

Baking the cornbread. Pour into a greased 9 by 9 by 2-inch pan. Slide it into the oven. Bake for 20 to 25 minutes, or until the sides of the cornbread are slightly shrinking from the pan and a toothpick comes out clean.