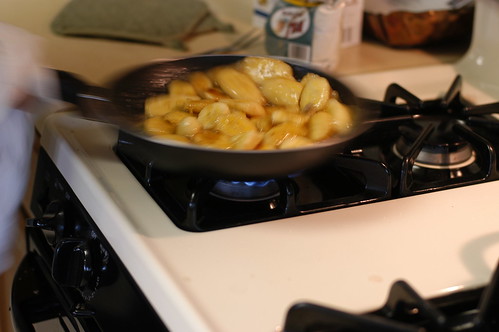 (We’re thrilled that this recipe is being featured at Oprah.com’s roundup of holiday recipes for 2009. For more of our featured posts, visit Oprah.com today.)

If I want to crack up the Chef, all I have to do is look at him straight on, and say “Pie.” He laughs, every time, his head bending down, the squeal erupting from him. This makes me laugh, and so, within a moment, we are both laughing and slapping our knees.

We must look like crazy people. Who laughs that hard at one word?

(The same thing happens with my dear friend Sharon and the word pants. Clearly, this is a trend.)

Of course, there are stories behind it. Mostly, it is a story I wrote in my book, the epic adventure of taking a still-steaming-hot cherry pie onto a New York City bus. (One version of it is in this piece on pumpkin pie I wrote in the early days of this site.) I’ve always loved telling this story. People laugh. But no one laughs as hard as the Chef. For some reason, it is his favorite of my stories. Whenever we are in a place where someone mentions pie  particularly in my baking classes  he nudges my side and starts to giggle. “Tell the story,” he whispers. And so it lives once again.

However, the word pie inspires more than laughter around us sometimes.

The day after Thanksgiving, when the Chef, Little Bean, and I were in Tucson, everyone wanted more pie. Our gluten-free pumpkin pie had been such a success that it had disappeared by the end of Friday’s breakfast. The Chef’s father actually didn’t know it had been gluten-free until after it was gone. We weren’t trying to fool him, but we had done it. The proof was in the empty pie pan.

The next day, after one of the Chef’s sisters arrived for a weekend visit (“the fun aunt” we call her), we talked about pie. The rest of us had, in our zeal for eating, left her only a slender sliver. “Not fair,” she called. We agreed.

“We could always make more pie,” we said. After all, we had brought a container of gluten-free flours with us on the plane, to make all the holiday treats. Several cups still remained. There was no point in taking them home. How about more pie?

“You know, I really like banana cream pie,” the Chef’s father said, as he sat at the kitchen table, reading the paper. He didn’t pay us much attention. I don’t think he expected his musings to become pie later. 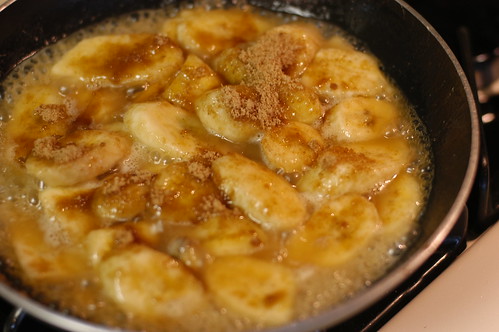 If there’s one thing the Chef loves to do, it’s cook for his family. Every wedding anniversary and family gathering puts him in the kitchen, joyfully dancing. And his parents had taken such care to feed me well during that week. His mother bought gluten-free bread mixes (that became the stuffing) and made me safe chocolate chip cookies. She also bought a brand-new plastic cutting board, put my name on it, and asked everyone to chop food for me there, and the food we would all be sharing. I felt so loved. The Chef wanted to reciprocate.

And so he started to make pie. Within moments he was sauteeing bananas in rum and brown sugar. Without heavy cream in the house  we had used it all  he found a can of coconut milk. The pie crust, baked a few hours earlier, waited for its insides.

I love watching him cook  the flip of the pan, the intent focus on the cutting board, the way he invents on the spot, based on what he has. I took photographs and notes. We laughed about pie.

Later that night, after dinner around the table together, the Chef pulled out the pie. It wasn’t entirely chilled  it would be perfect the next day  and he worried it had not set enough. Nobody else worried.

His father looked at the slice of pie on his plate  his wish become fulfilled dessert before him  and said, “I didn’t know you’d actually make this.”

We grinned. Another pie story. 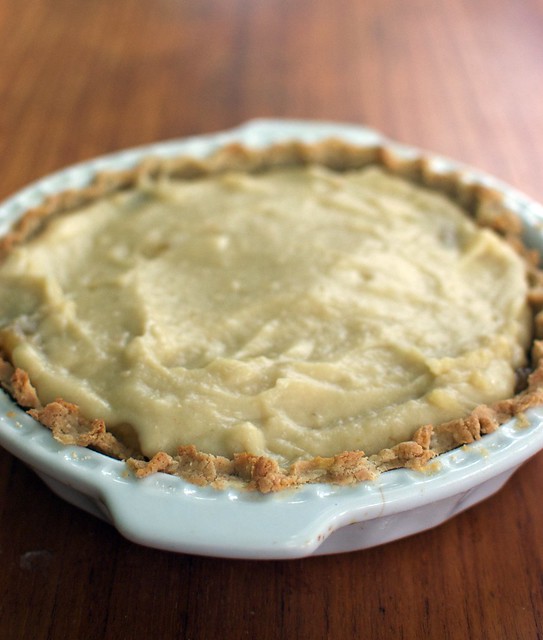 This pie, by accident, became both gluten-free and dairy-free. No one was complaining in the Ahern household. It takes only a few set of steps to complete  blind baking the pie, concocting the cream, and sauteeing the bananas. If it sounds like too much work for one slice of pie, let me reassure you  it’s worth it.

The original recipe comes from a battered old cookbook with spiral binding in the Chef’s mom’s kitchen drawers: Creme de Colorado, put out by the Junior League of Denver. The Chef grew up in Colorado, and that state (both geographical and of mind) is vastly important to all the Aherns We thought it fitting to bake something from its pages. After all, the Chef’s mother said, “I’ve cooked out of it for years, and only one recipe was a clunker.” (Could it have been the granola with wheat germ and soy beans?) I’m realizing that cookbooks like this  PTA collections; Junior Leagues; the best of bake sales  are treasure troves for gluten-free adaptations. After all, every cook turned in her absolute best to be published. And how can you beat their personalities?

This pie? Oh my. We approve.

1 gluten-free pie crust (for the folks who need to be gluten-free and dairy free, try this dough. If your guests can eat dairy, replace the “buttery sticks” with butter.)

4 bananas
1/2 cup brown sugar
3 tablespoons butter (if you need this to be dairy free, use non-dairy “buttery sticks”)
3 tablespoons dark rum or kahlua

Baking the pie crust. Once you have your pie dough made, roll it out between two pieces of parchment paper to the size of the pie pan. Place it in the pan, press it in, and fill any holes with the extra dough. Spread a piece of buttered tin foil to fit snugly into the pie crust. Fill it with dried beans or pie weights. (This will prevent the pie crust from puffing up.) Slide the pie crust into a 375° oven and bake it for about 15 to 20 minutes, or until it feels set and has started to brown. Take out the beans and set the pie crust aside to cool.

Making the custard. Combine the sugar, cornstarch, and salt into a saucepan on medium heat. Stir in the coconut milk, gradually, stirring all the while. When the custard has come to a boil, let it remain on the heat for 2 minutes, or until it has begun to thicken to pudding consistency. Remove from the heat.

Tempering the eggs. Stir 1/4 cup of the custard mixture into the egg yolks, stirring continuously until it is all mixed together. Pour the egg mixture back into the remaining custard. Cook on medium heat for 2 more minutes.

Finishing the cream. Remove the custard from the heat. Add the coconut extract. Stir.

Sauteeing the bananas. Melt 1 tablespoons of the butter in a large skillet. Add 2 of the bananas. Sauté for a few moments. Add the sugar. Keep flipping and sautéeing. When the sugar starts to caramelize, add the rum. Reduce the rum. It might flame — don’t panic. Stir the pan by hand. When everything looks caramelized and reduced, add the remaining butter and bananas and stir. When the butter is incorporated with the rum, take the skillet off the heat.

Finishing the pie. Pour the banana mixture into the bottom of the pie crust. Cover with the coconut custard. Refrigerate overnight, ideally.