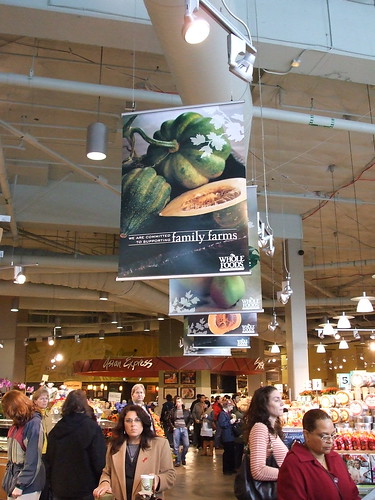 Yesterday, about noon, the Chef and I walked into a madhouse.

About an hour before, he casually mentioned that he needed to pick up a few pounds of jasmine rice for the restaurant. (Hes making aromatic rice with the organic king salmon special, a rice simmered with lemongrass, pepper, ginger, and butter.) No problem  part of our day is driving through the city, fetching the fish for the restaurant and stopping for supplies. I love those trips with him. Were in the car together, commenting on all the strange people we pass, singing along to good songs on the radio, and talking about food. At stoplights, sometimes, he puts his head on my shoulder, and I put my head on his, and we sit like that until the light turns green and it is time to go again.
How could I mind that kind of errand running?

Yesterday, after he mentioned that he needed jasmine rice, I sat up in bed and said, Hey! That new Whole Foods opens today! Lets go! (I grow excited, to the point of three exclamation points, about new sources of food.) For days, the newspapers had been building this story. A big grocery store downtown! Organic food! Thousands of square feet big! Always wanting to see where the food action is, the Chef and I drove down Denny and made our way to the entrance of the store.

As soon as we entered, chaos ensued. Women in expensive coats banged into thin young men with goatees to reach the gleaming piles of produce first. Seven sushi chefs stood behind a plastic partition, furiously chopping and producing pretty tuna rolls. Walls of cheese beckoned us over to try more and more samples. Dozens of scrubbed-clean employees bustled through the crowds, wearing green aprons made of organic cotton and enormous, Stepford-wife smiles. They were just so happy to be serving us. There were little towers of tiny tins of spices, breads bursting out of their bags, and an entire section devoted to brightly colored useless kitchen utensils. (Really, does anyone actually need an avocado slicer?) Every aisle was full-to-surging with downtown residents on their lunch break, gawking at aisles of olive oil and a seafood station where they smoke fish for you as you wait. At the entrance of the store, a steady stream of tourists snaked their way in, after a stop at the Space Needle, which loomed in the distance. Most of them looked up at the high ceilings and the bounty of food before us as though they were entering a cathedral.

Maybe this is as close as we come to a cathedral in modern-day society.

Poor Chef. He was overwhelmed. He grew up in a town of 500 in Colorado. And even though he has lived in Seattle for many years, and he even spent six months in New York working at Gramercy Tavern  at the same time as I lived there, and we lived twelve blocks away from each other and never knew it  he is a country boy at heart. Crowds intimidate him. More than that, he truly does take everything in through his senses. He has no filter. So the barrage of intense color and frantic noise, organic food and thronging crowds, made his senses shut down. Luckily, I lived in New York longer than he did, and I know how to turn my body and make my way through crowds fast. I held his hand and led him to the bulk section. We filled a large bag from the brand-new bins and walked fast to the check-out counters. As we left, we saw twenty-two more people coming in.

We both felt good being back in the car.

Im of two minds about Whole Foods. On the one hand, Im a little overwhelmed by what a brand-logo-way-of-life they have become. Its clear when you walk into any Whole Foods  but particularly the one I lived in for ten minutes yesterday  that they are selling more than tortilla chips and toilet paper. If you want to live the Whole Foods way, you sip organic tea as you lounge in your organic combed cotton robe from Japan and eat organic vegan cookies and write to your congressperson about organic farming.

Then again, thats not entirely a bad way to be. (Well, Im not a big fan of vegan cookies.) If theyre going to sell a way of life  and isnt that what every corporation is doing?  at least it is a good one.

Their gluten-free cookies, brownies, and scones cost more than some people in Latin America make in a week. $7.89 for four cookies?

Their organic produce has the vivid colors of a Magritte painting and the gleaming-perfect skin of a fifteen-year-old fashion model. How does that happen when the apples and pumpkins I buy directly from the farmers have beautiful imperfections on every piece of fruit?

Then again, at least Whole Foods is bothering to establish a connection with local farmers and support organic growing.

The fact is  I shop at Whole Foods. I also walk across the street to our local store nearly every day. I wander through farmers markets at least once a week, if not more. I heart Trader Joe’s and PCC and Metroplitan Market. And sometimes  gasp!  late at night, the Chef and I are seen in Safeway.

Where do you buy your food?

I have to say, as maddening as the experience was  it made me happy to see a mob rush toward an organic grocery store. All for good food!

Im just not going back until the tourists stop traipsing in.

33 comments on “the new whole foods”