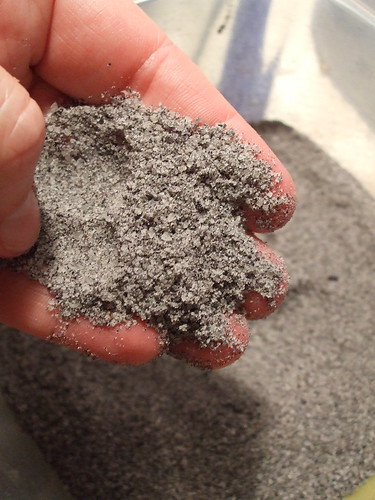 I don’t know why it took me so long to figure this out. Did you know you can make your own rice flour?

For over a year, I dutifully bought expensive bags of rice flour, trying to find ways to save on what has become a staple in my kitchen. Of all the gluten-free flours, rice is the least expensive. (Have you bought a bag of quinoa flour lately?) Thank goodness, because rice flour is the one I use most often in baking. Still, it’s pricey to buy it.

Then, a couple of months ago, I went into the Chef’s kitchen to ask him a question. We were working in the restaurant in the afternoon, before anyone came in, he in his tiny rectangular kitchen, me on the couch by the door, writing. When I went in, I saw him dump the last of his white rice flour into a bowl, in preparation to make a gluten-free dessert. When he saw he didn’t have quite enough, he pulled out his spice grinder.

“What are you doing?” I said, puzzled.
“Making rice flour,” he said with assurance, as though I had seen him do this a thousand times.

Wow. You’d think that with all this writing and cooking and experimenting with gluten-free food, I would have thought of this long ago. I love this man.

Since then, I have simply made all my own rice flour, in small doses, as I need them. Certainly, I don’t always have flour as superfine as the commercially produced ones. But they are fresh, and cheap, and mine. (Besides, if you put the rice flour through an old-fashioned flour sifter, the final product is gleaming fine like sand worn down by waves.) Different rices make different kinds of flours, of course. Arborio rice, full of starch, makes an especially crunchy flour, which isn’t always great for baking. Short, sweet rice makes fantastic soft flour. I’m loving the playing.

A few weeks ago, the Chef and I bought some “forbidden” rice in the bulk section of PCC. This black rice comes originally from China. Legend has it that is called forbidden because no one but the emperors of ancient China were allowed to eat it. Those pesky rulers hoarded the rice because it was so rich in nutrition that they felt no one else but them deserved it. That may be a story put out by the peasants, but the fact is  this is a beautiful rice. Black in its raw state, it cooks up a rich purple. It is high in iron and simply tastes healthy. And lovely.

The evening we bought it, as an experiment, I started grinding it into a flour, which turns ashy grey, with little glimmers of purple and shiny white. It makes a dramatic and delicious dredging for fish.

Last week, we ate one of the best dinners I have ever eaten, in our living room, at midnight. The Chef dredged thick slices of black cod in this black rice flour and laced it with wasabi. On the side, jasmine rice that had been steamed with chunks ginger and lemongrass. Topping it all was a tamari-butter sauce. I screamed after I took my first bite, “Oh god, will you marry me?” Even the Chef, who likes to say that is food is “just okay,” made moany noises when he ate this. We both agreed  black rice flour on white fish from now on.

28 comments on “flour as dark as Seattle skies in November”