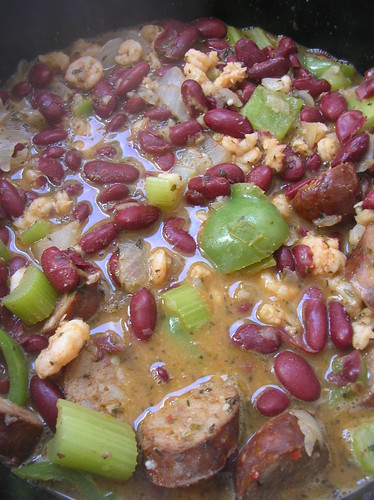 I couldnt just keep feeling furious at incompetent officials, walking around broken-hearted about people starving on the streets, or watching the television for hours at a time while pacing the living room. Mostly, I had to stop watching the television. Its bad for the psyche. I knew what I had to do, the only activity that would occupy my mind, my heart, and my hands.

I had to cook.

Ive been wanting to make food from New Orleans for days. I cant fly back there and put my hands in the water to lift people out. I feel a little helpless about my inability to help. And Ive never been to New Orleans. Ive always wanted to visitfor the jazz, the history, the people, and mostly the foodbut Ive never made it down there. And now, I dont know if it will ever be the same. Will I ever be able to visit the New Orleans it once was? I dont know.

But at least I can make some food.

Luckily, the latest Paper Chef competition(to coincide with the new re-design of Is My Blog Burning?) called for a recipe of our own devising, in the spirit of Louisiana, with four ingredients: beer; sausage; shrimp; and tomatoes. Well, the beer, of course, I cant do. Ive heard tell of gluten-free beer in the US, including the intriguingly named Bards Beer, but its only available in New York. Not in Seattle. So beer was right out. But luckily, Own at Tomatillo allowed us to use any alcoholic beverage of our choice. Im on.

But what to make? I thought of jambalaya, but it felt a little too complicated. Anything with a roux was out, since it relies on flour so much. Of course, I could use gluten-free flour, and sometime I will. But not today. Im working on a flourless chocolate torte for tomorrow, so I was in a flourless mood. Gumbo? Doing a little research online, I ran across a site called Gumbopages. Youve got to love that name. And I ran across an entry for red beans and rice. This is New Orleans. This is it, he wrote. And I was ready. 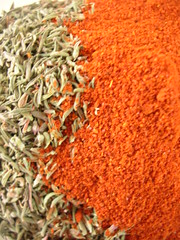 As with all cooking, New Orelans cuisine is the source of much dispute. Everyone has a red beans and rice recipe, and each one claims that his is the best. And everyone has a slightly different mixture of spices to make Creole seasoning. But since Im a West Coast girl, who has sadly never been to the South, I decided to pick one and follow it exactly:

Im so lucky to have a PCC near me. Seattle is filled with interesting grocery stores and co-ops, with natural foods and organic fruits. And the Fremont PCC has an enormous organic spice section, where I can buy fresh spices in bulk. This is, by far, the best way to buy spices. In small doses, frequenly, only as I need them, and for cheap. Each of these spices cost me about 67 cents. I like that.

When I returned home, just a bit sunburned from the last warmth of the summer sun, I started mixing. The colors alone were enough to captivate me. It all smelled fanstastic together. Except for the white pepper. I know that white pepper is necessary, and I could taste it later in the finished mix, but god lord, white pepper smells like the devils fart.

Still, I was inordinately excited to have a new mix of spices. Theres nothing like experimenting in the kitchen. 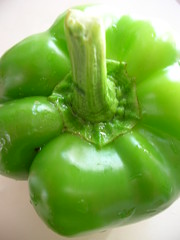 According to the reading I did about New Orleans cooking, theres a holy trinity in the kitchen: onions, celery, and green pepper. Id attend that church.

Sauteeing the onions, then adding the celery, I could suddenly smell the holidays. My mother has always made pure, uncorrupted stuffing for Thanksgiving: butter, onions, celery, pepper, and crusty bread. Nothing more. Nothing less. This afternoon, watching the onions starting to turn translucent, I remembered this in my body, and suddenly, the end of summer didnt seem so bad.

Oh, after the onions, celery, and pepper were soft, I added about seven cloves of garlic. Im a garlic girl. 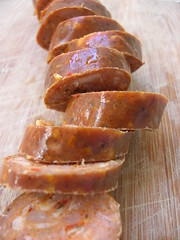 Andouille sausage seems to be the sausage of New Orleans. Spicier than any other sausage, and stuffed full of smoky flavor, this is great stuff. (If you like meat, of course.) Now, I could have gone crazy and made my own sausage, but the recipes I saw seemed to call for pork butt. I think I can safely say thats never going to happen. If I had been organized, I would have gone down to one of the butchers in the Market, or up here on Queen Anne hill, and bought fresh-made andouille. But lifes imperfect, and so am I. I thought of this project only this afternoon, so I just bought some packaged andouille sausage at PCC. Wellshire Farms makes sausages without using antibiotics, nitrates, additives, or artifical fillers. And theyre gluten-free.

After I had boiled the beans, with bay leaves, dashes of creole seasoning, garlic cloves, and healthy splashes of sherry (theres my alcohol, which seemed sort of weenie at first, but it tasted fairly exquisite, actually, and Id use it again), I shoveled in the trinity and threw in the sausages. And then some little shrimp, already cooked, which I knew would shrivel in the simmering, but theyd soak up all the tastes around them.

And then I put it on the burner to boil, and simmer, and bubble, and start to create something new. It smelled good already. The recipe called for two hours, preferably three, of simmering and stirring. But the light was fading, and I wanted to move. So I threw it all into the crock pot and turned it on high.

When I returned from my bike ride, I swear, I could smell it from the street. It made me think of this quote I had read about red beans and rice:

I guess it’s appropriate in a way that Buster Holmes died on a Monday. Monday is red beans and rice day in New Orleans, and that is the dish that Chef Buster was most famous for. Buster Holmes’ Bar and Restaurant, which was located on the corner of Orleans and Burgundy in the Quarter was a classic Creole/soul food place — turnip greens, pork chops, roast garlic chicken, and of course, red beans and rice.

Most lunch counters in New Orleans still serve red beans and rice on Mondays. This tradition goes back a long way. Red beans take a long time to prepare, so many families ate them on Monday so that mom could start them on Sunday and do them right. The smell of red beans cooking would completely permeate neighborhoods. Our instant-food culture has changed this in terms of home cooking habits, but we New Orleanians still love our red beans.

And it made me proud, to make something as a protest against our instant culutre. As an homage to New Orleans. And for myself, because I just couldnt wait to eat. 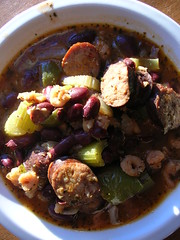 Oh gosh it tasted good. Smoky from the sausage and the seasonings, chewy from the soft vegetables and beans, deeply flavored from the complex seasoning mixturethis meal just made me sigh with pleasure. Before I had left for the bike ride, Id thrown in four, chopped-up San Marzano tomatoes, because I wanted them to still have some shape in the dish. (But I took pictures of the dish before the tomatoes, because the light was fading, and cooked food just doesnt look good under electric light.) And I was flexible with the wrist when I dashed in the hot sauce, so this red beans and rice made me open my mouth after every bite to ameliorate the heat. Yes.

This was my first time making red beans, the first time in my life. But I think Ill be making it often. Traditionally, families in New Orleans ate red beans and rice on Mondays, because that was wash day, and mother could set a pot of beans cooking and stir it throughout the day between loads of laundry. I wouldnt be surprised if I end up, some Sunday afternoons, with a clean set of sheets and a pot of red beans.

Im sure this wasnt real, authentic New Orleans red beans and rice. I wanted to throw some bourbon in there, but I didnt have any. I couldnt drink it with a tall, cold beer. I needed to avoid the pork butt. I didnt have any white rice in the house, so I had to serve it over brown.

But in the end, I let all those imperfections go. Recipes are meant to be changed, constantly adapted. And besides, far more importantly, I know there are thousands of New Orleans families that would have given a lot of money to have their own kitchen and hours in it to make red beans and rice.

Im blessed. And I wont soon forget it.

RED BEANS AND RICE, from the Gumbopages, with a few changes from me

Soak the beans overnight, if possible. The next day, drain and put fresh water in the pot. (This helps reduce the, um, flatulence factor.) Bring the beans to a rolling boil. Make sure the beans are always covered by water, or they will discolor and get hard. Boil the beans for about 45 – 60 minutes, until the beans are tender but not falling apart. Drain.

[Not having planned ahead, I only had canned beans. I used three cans of red kidney beans, drained and rinsed them, then threw them in a big stockpot with some water, sherry, creole seasoning, bay leaves, and garlic cloves. I let them boil away for about half an hour.]

While the beans are boiling, sauté the Trinity (onions, celery, bell pepper) until the onions turn translucent. Add the garlic and saute for 2 more minutes, stirring occasionally.

[I’m pretty much thinking that the more garlic, the better.]

After the beans are boiled and drained, add the sautéed vegetables to the beans, then add the ham hock (or ham or pickle meat), smoked sausage, seasonings, and just enough water to cover.

[I skipped the ham hock, which I’m sure was a travesty. Intead, I just threw in the sausages, seasonings, a little water, more sherry, and the shrimp.]

Bring to a boil, then reduce heat to a low simmer. Cook for 2 hours at least, preferably 3, until the whole thing gets nice and creamy. Adjust seasonings as you go along. Stir occasionally, making sure that it doesn’t burn and/or stick to the bottom of the pot. (If the beans are old — say, older than six months to a year — they won’t get creamy. Make sure the beans are reasonably fresh. If it’s still not getting creamy, take 1 or 2 cups of beans out and mash them, then return them to the pot and stir.)

[As I wrote, when the concoction had boiled down to as much liquid as I wanted, I threw it into the crockpot and let it bubble on high for nearly three hours.]

If you can … let the beans cool, stick them in the fridge, and reheat and serve for dinner the next day. They’ll taste a LOT better. When you do this, you’ll need to add a little water to get them to the right consistency.

[And I’ll be serving more tomorrow. I can’t wait for the leftovers.]

9 comments on “red beans and rice”